Diabetic eye disease is the leading cause of blindness in the developed countries of the world, including Singapore. With the recent rise in our diabetic population, we can expect its incidence to increase.

What Happens in Diabetic Eye Disease 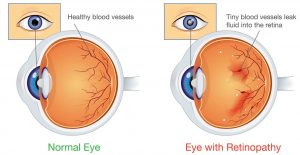 In the early stage of disease, called background diabetic retinopathy, vision is not affected unless the leakage of blood and fluid happens to involve the macula. Therefore, all diabetic patients should have their eye checked once a year by an eye doctor, even if they have no visual symptoms of blurred vision.

In its more advanced stage, called proliferative diabetic retinopathy, abnormal blood vessels begin to grow on the surface of the retina. Because these vessels are fragile, they bleed easily. If the bleeding is severe, there will be sudden loss of vision. If left untreated, sever scarring occurs in the eye and blindness ensues.

The key to successful management of diabetic retinopathy is early detection of the disorder and prompt laser treatment. Therefore, all diabetic patients should have their eyes checked at least once a year by an eye doctor, even if they have no visual complaints.

Laser treatment is done with the ophthalmic laser. The laser machine produces a special light beam that turns to heat when it is focused on the retina.

In some patients, laser treatment cannot be used because of heavy bleeding preventing the laser light from reaching the retina or because of excessive scarring causing retinal detachment. In these patients, a relatively new surgical procedure called vitrectomy has been developed which allows the eye surgeon to operate directly on the retina within the eyeball itself. About 60% of these patients will have improves vision following the operation. These results are encouraging considering that in the past, the eyes would have been lost.

Follow-up of patients with diabetic eye disease is life-long, even after successful laser treatment. This is because the underlying cause of the eye disease, diabetes, remains and has the potential to cause new eye problems.

Examination of the eye for diabetic eye disease requires a painless examination of the back of the eye. Eye drops are first instilled to dilate the pupils. The dilated pupil allows the doctors to examine the retina thoroughly using an instrument called the ophthalmoscope. Sometimes, to document or obtain further information about the condition, the doctor may want to photograph the retina and do an investigation called fluorescein angiography. This investigation involves injecting a yellow dye called fluorescein into the bloodstream. Photographs are then taken with a special eye camera as the dye is carried through the blood vessels of the eye. The photographs will show clearly the extent of damage to the eyes by the disease. Based on the information obtained, the doctor will be able to advise on the best management of disease.